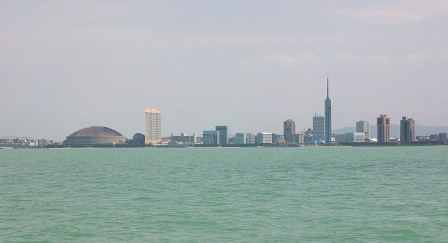 from the Bay (thanks Paul)

The last few months of 2004 were marked by 2 major events.

First the departure from Jan Haring and second the string of typhoons that visited us.

Good to report that we survived those typhoons with out any major damage, but boy was it stressful by times.

And good to report that Jan Haring is now being looked after by Remo all the way in . 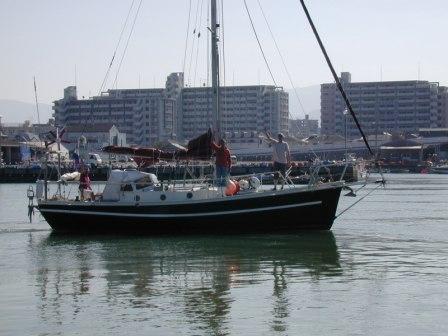 Above: the final waves made by JH in , .

And belowJH making fresh new waves in the Inland Sea, on its way to . 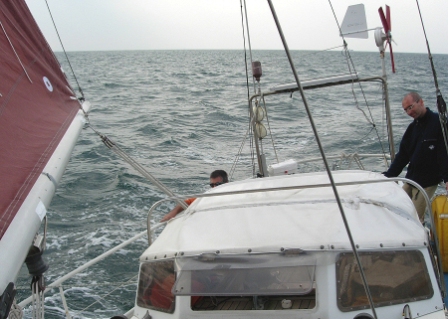 And here at a pit stop in

Then there were all those typhoons.

By times it was rush-hour..

We were affected by at least 5 of them and saw the wind speed by times hitting 80+ knots. But luckily all gave us wind from the NE, N and NW.  One had a nasty tail with a wind shift to the SWthat put us a bit on a lee shore.

The only typhoon-damage we had was a blown-away radar reflector and some sleepless nights Not a bad score for looking after 2 yachts at the same time ( and the odd neighbor yacht that was neglected by its owners).

If a typhoon is on its way into our direction, we first of all hope it will pass us OR overhead OR to the east of us. Both times it will give us wind from the NE, N and NW. In that case our location in the harbor is the best.

With a typhoon center to the west of uswe are on a lee shore.  Despite all the extra lines (all the way across to the other side of the harbor) and bumpers, thats never fun.

One lucky part of a typhoon is that the schools are closedso we have the day off;-)) 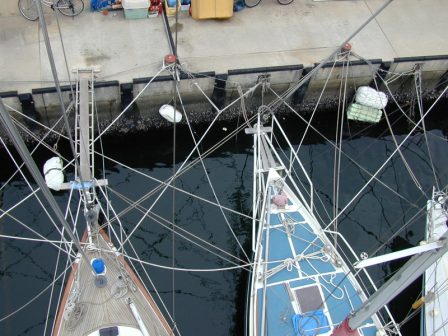 And then came November: Party time as we got a visitor.

Nettie made one of her stops on her Around the World trip! It was good to have her back on board again. After all, Nettie had sailed with us on Jan Haring in 1989 (NZ~ Japan) and 1993 (NZ~ ).

Too bad we didnt have the time for some sailing. (So you have to catch us again Nettie!!)

Thus, what better to do than to go for a good meal of sashimi, sushi, tempura or noodles?

Or a visit to one of the zillion temples in autumn colors?

And it was time to do some miles with Alishan.as we went all the way across the river to the marina of Marinoa for a haul out. After 1 weekend of hard work & luck with the weather ..    Alishan was ready for a re-launch.

This time with the name sticker on the hull.

We also wanted to replace some thru hull fittingsWe ordered them, but then the marine shop came up with the wrong valvesOh well, thats something  on the list for next time;-))

Q4 was also marked with a lot of miles done..on the road, as prep for an other Full Marathon.  Marijke didnt have a good season, a returning muscle-complain, with the result that she had to give up after 32 K-ace in the race.

Japie did alrightbut will never ever eat muesli for breakfast again on the day of a marathon: By times the best part of the speed came from the rush to a toilet, and then time was lost by using that mobile poo-box.

Anyway, we had fun with our friends, soaked for hours in the hot spring afterwards and ate way too much nice food so we both gained 2 kilos.

This running is addictingwe hope to do it again next year.