The people in saw Jaap running around bare-bummed this year for the fifth time   as a member of Doi,

one of the Yamakasa teams.

This is what the web tells about the festival:

Hakata Gion Yamakasa is an annual summer festival held from July 1 to 15 by Kushida Shrine in , , which is the center of Kyushu in the southwestern part of . With a history stretching back over 750 years, in 1979 it was designated an Important Intangible Folk Cultural Property.

In 1241, to drive away an epidemic in Hakata, a high-ranking priest was carried by local residents around the town on a shelf and sprinkled holy water along the way. The Hakata Gion Yamakasa of today evolved from this event.

A Yamakasa is a portable shrine to carry a deity during a festival. There are two types: the Kazariyamakasa (decorated floats) and Kakiyamakasa (carried floats).

Kazariyamakasa are enormous, about 16 m (17.5 yd.) high. They are decorated with magnificent dolls that illustrate various historical or legendary tales. During the festival they are displayed in different parts of the city, where people can enjoy looking at them.

By contrast, the Kakiyamakasa are only 5 to 6 m (about 6 yd.) high, but  weigh close to a ton. Seven floats are made for the festival and on the final day they appear in a race known as Oyama 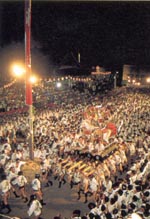 At the climax of the festival, local teams carry the Kakiyamakasa and race at full speed along a 5 km (3.1 miles) course. At 4:59 a.m., with the beat of a drum, the first team departs from Kushida Shrine, carrying their Kakiyamakasa, with the others following at 5 minute intervals. The teams compete to complete the course in the fastest time. Despite the early start, the spectacle attracts 850,000 tourists from all over . The teams yell the traditional chant, "Oissa! Oissa!" as the excitement peaks, and throw water on the men as they pass to cheer them on. The headlong dash lasts for about 30 minutes, as the several-hundred members of the teams take turns carrying the float, which requires 32 men to carry, in a fever pitched atmosphere

Every year its a great honor to be able to take part in this Japanese festival as it is a very special way to experience some real Japanese traditions.

The 2 weeks prior to the Oyama is full of practice races and ceremonies. Not all is easy to understand for a westerner, but that makes it so super exotic.

Hope to be able to run again next year: Oissa Oissa! 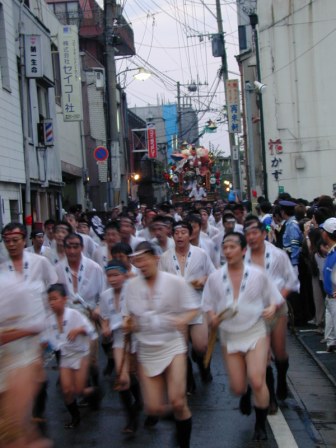 The annual rainy season (from June till mid July) started late this year and when it finally rained, it wasnt too bad. There were luckily no big floods like last year.

The end of the rainy season is always celebrated with some Big Firework Displays and it was time for our 3 week summer holiday.  Wow 3 weeks in a row of no work! A First in our 10 years in .  And did we enjoy it. Of course we couldnt do all those things wed been dreaming of, but we tried to pack in as much as possible, so after those 3 weeks we needed a rest and were ready to go back to work.

So what did we do?

First we sailed to . Unfortunately there wasnt much wind, so the Yanmar got a good workout.

is the major port in the SE corner of , about 120 miles from . (Pusan has a decent size marina as it was home to the sailing events of the Olympic games in 1988.)

There we had a great time with our Korean cruising friends. 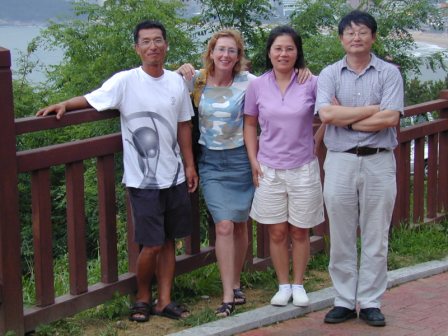 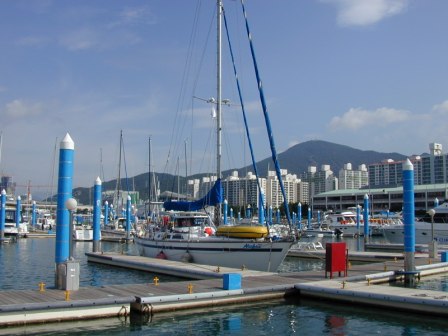 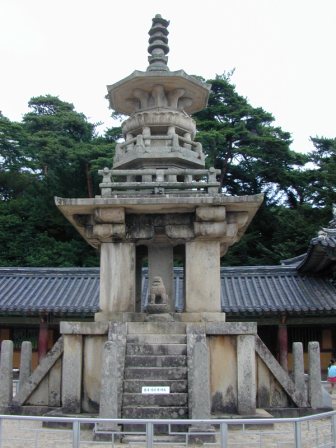 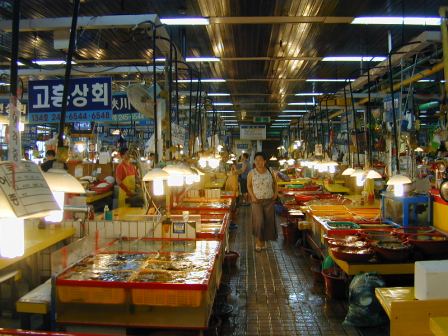 Sailing back to Nihon was Superb.    The Windpilot steered Alishan all the way, doing 7~8 knots.

Checking back into was a Big Laugh.

We had everything well prepared. We had given the Japan Coastguard all the needed info way in advance and they still felt they had to email us twice for more details while we were in . Upon arrival in we used the VHF and telephone to call officials, but were only able to contact the JCG. They cleared us right away. Just like that, over the phone. The Quarantine people never answered any VHF or phone calls and we decided to move into port. We picked up our anchors, tied the ropes and took the car downtown to continue the check-in show. We just walked in to see Quarantine, Customs and Immigration at their offices in the Korea Ferry terminal.

Oops what a watertight system.

Anyway, after half a day of paperwork we were ready for a big meal of sushi.

Alishan stayed 3 days in port for it was Obon time (another Japanese festival) and we definitely wanted to see the final big firework display right at our front door. 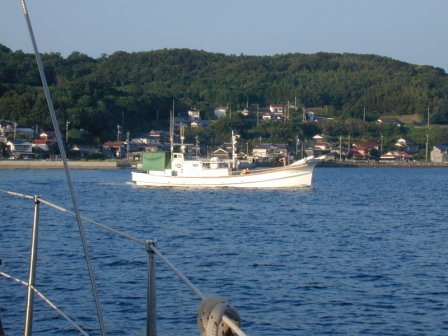 The day after, on August 16th we sailed to Hagi, a small town in Yamaguchi prefecture, 90 miles NE from . Too bad there was little wind but that suited Wakame and Nori who still had to get their sea legs. (They didnt sail to with us as s Quarantine might have given problems. See above)

In Hagi the only marina wanted $ 50/night for tying along side a concrete wall, with no acses to water and no electra. There is definitely something wrong there.

We left right away and Alishan found a nice corner in a commercial fishing harbor, along a same sort of concrete wall, but for free and with daily fresh fish from the fishermen. Thanks a lot guys! 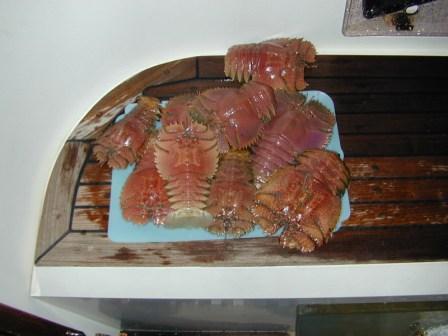 Hagi city is a beautiful old castle town. This is what I found on the web:

Development of in north began when a powerful warrior family, the Mori clan, was assigned as feudal lord of this district and moved into in 1604. Feudal lords in were called "daimyo," and were rulers of a politically and economically independent local domain (i.e. "han") maintained during the Period (1603-1868). Warriors who were retainers of the lord and merchants gathered around the castle and formed a city, and those cities are called "jokamachi" (castle town).

Although many of the current major cities in developed from a castle town, most of them have been totally modernized and only a few retain the original appearance of warriors' residences lining the streets. Hagi, however, was left behind in rapid modernization, partially because the local administrative center was transferred to present-day in the late 19th century. As a result, many rare structures built in the feudal age remain and their solemn, dark-gray roof tiles and white walls add to the town's quiet and antique atmosphere. Magnificent samurai (warrior elite) residences and wealthy merchants' estates with large storehouses are still to be seen and remind us of the town's prosperity.

During the tumultuous closing years of the Edo period when the feudal system was collapsing, the town of produced many men of talent who became the driving force that propelled the country toward becoming a modern state. Scholar Shoin Yoshida (1830-59) laid the ideological foundation of the anti-Shogunate movement; Shinsaku Takasugi (1839-67), who once studied under Yoshida, formed a new-concept, voluntary army with no class discrimination; Hirobumi Ito (1841-1909) became Japan's first prime minister and introduced the cabinet system. The houses where these people grew up and private schools which they attended are also preserved as historic sites and are open to the public.

Too bad there was a typhoon spooking around to the SE of Japan with no indication if it would go NW or NE. To be on the safe side, we decided to sail back to . Nothing beats a typhoon in ones own harbor. ;-)

And that was the end of our short summer cruise. Day by day, mile by mile we get more confidence in Alishan and are really looking forward to our ETD.

Still having days off from work  Jaap joined the crew on board of  Sumie Maru (our Sunday morning fish market boat) and was so lucky to be able to help with a BIG catch. Wow, exciting! Every time the net is pulled in you could tell it was full, but with what?

That day we caught lots and lots of kisu, small, but very tasty fish that goes for a high price at the municipal fish market, all the way in .

We got neighbors in the pond. Meridian Passage with Jeany and Merv from our old hometown Whangarei in NZ. How nice. Apart from just the gezelligheid we really needed an upgrade in our English speaking companions, since wed started conversing in that Japanese kind of Pidgin.

Soon after they were settled in we got a direct hit by typhoon NABI. At first max wind was slightly over 40 knots. Not much. The center went right over the top of us and we had almost 1 hour of center-silence. That, with the apparent lack of very strong winds fooled some people into thinking the storm had disintegrated, but after the eye it hit us with double force: 65 knots. That was the only taiphoon that affected us this year, what a contrast with last year. 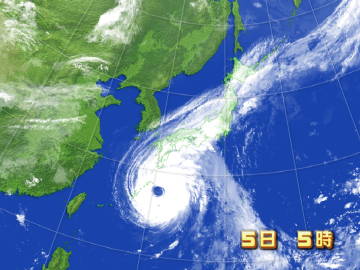 One week later we flew for a weekend to in with Jaaps hospital co-workers.

Then Japie ran the Fukuoka City Half Marathon (again hothot this year) and finished within the time limit of 2 hours. Banzai.

One rainy Sunday we hiked around in the mountains just to the south of us. Due to the landslides caused by the rain and/or the earthquakes we werent sure of the trail and it took us 7 hours to return to our car, despite the perfect directions this friendly farmer had given us. 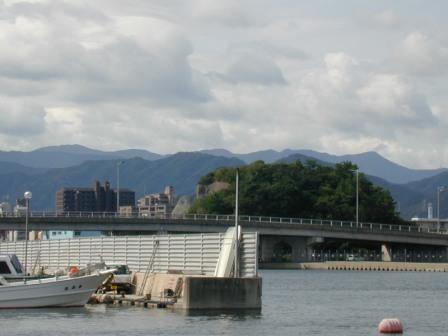 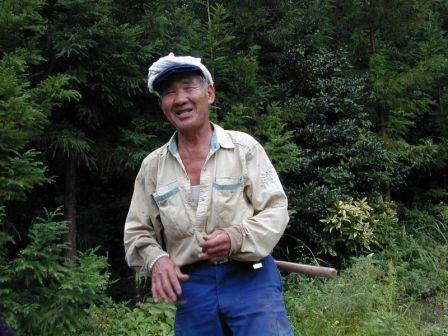 We hiked from the far left mountain top to Mt Raizan on the right.

Not much work done here. It was way too hot and somehow the list doesnt seem that long. Just for this moment ;-)) I should say.

Hmm Oh yes. We cleaned the strainer of the shower pump, mounted a new swim ladder on the platform, installed 2 new house batteries, did an oil job on the generator  and varnished the toe rail ( 2x 43 feet all 5times= a long way). Thats all.