We started April on the run as we joined the annual Saga Sakura Half Marathon, for the 3rd time. Thanks to this years cold spring weather the sakura (cherry blossom) was late and just on its peak. The full blossom trees along the course made the 21 km (almost) a joy to run . For Marijke it was a bit of a  love~hate run as an old injury was popping up in the final 5 kms.  For Jaap it was a nice warming up for his next running adventure.

We crossed the finish line side by side at 2:09. During this run, we discovered that this year we are together 100 years old and well have our 25th anniversaryhow romantic running can be

Afterwards we went to a luxury Hot Spring and had a Big Feed as usual, with our running buddies .. What a way to begin spring. 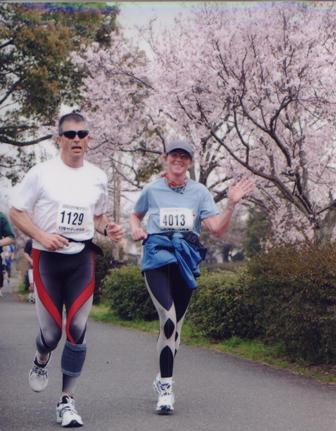 A few days later Jaap flew to to see Mom and the Gang and to take part in the 25th Rotterdam Marathon.  And what a party those 42 kms were! The more as Loek from NZ, his brother Hans and friend Henk were also running. Together with another 12.000 people. Wow, what a crowd! And then all those thousands and thousands of spectators along the course, including Mom and the Gang: Shouting, making music and cheering the runners. An unforgettable experience, semi perfect weather and a new best time for Japie:  4:17 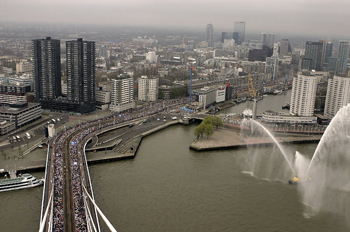 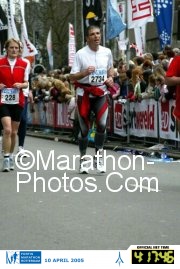 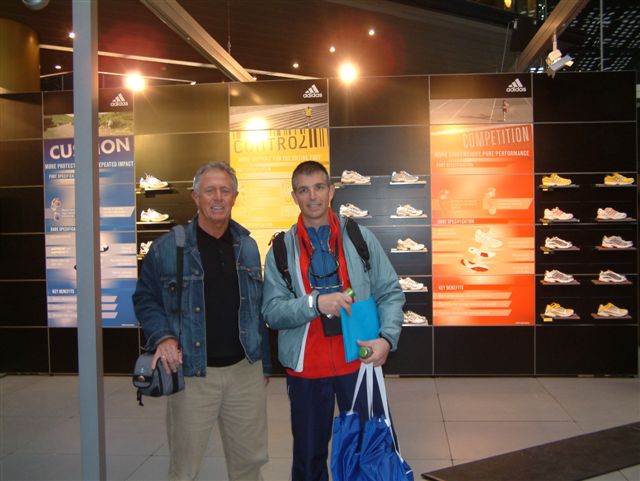 for taking me around the course and the moral support, hope to run with you again some time.

Yes we did live there, but could we ever again?

Weather wise: No way. The day before the Rotterdam Marathon (April 10) it even snowed!

People live a fassttt chaotic life. For example: driving a car, you dont stick to the max speed! Wrooommmmm ,  speeding, just to make sure that you are one of the first in the next traffic jamand there are many traffic jams in

But nevertheless I took some nice shots. Here you go: 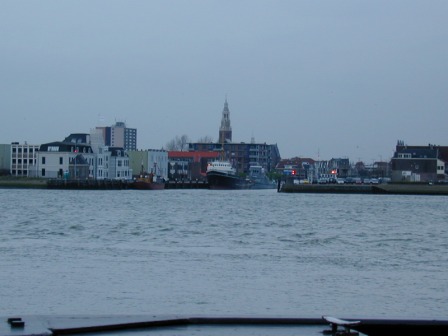 In the meantime Marijke had a big project going on, home alone as she had to look after Alishan, the cats and..  sy Leonore.

Owner David and crew made an important pit-stop as part of their trip to and . The idea was to park Leonores 80 feet in Marinoa, the commercial marina across the river. But after the earthquake (see previous report) the marina had (temporary) closed down as the walls were tumbling down. The management didnt dare to allow Leonores 80 feet into their marina.

1+1=2 made me talk to our fishing harbor manager and with some shift work, the 80 feet fitted nicely alongside Alishan. Result: David happy, we happy and in the meantime helping the fishing cooperation to a little extra cash.

Had Alishans mast (18 meters above sea level) been a landmark beforeNow even Leonores mizzen mast was taller. The main mast sticks 35 meter above water. What a height! What a length! And so was the jobs-to-do-list: 80 feet long.

Anyway, what happened: during my 10 days trip to ? The crew of Leonore decided to tour and Marijke was asked to look after the fleet.

Well, she did that with Big Bangs. Her wadaiko group had a serious performance on Sunday the 18th. 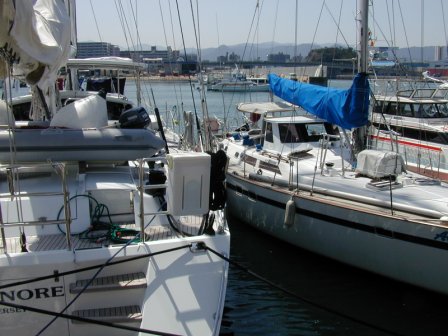 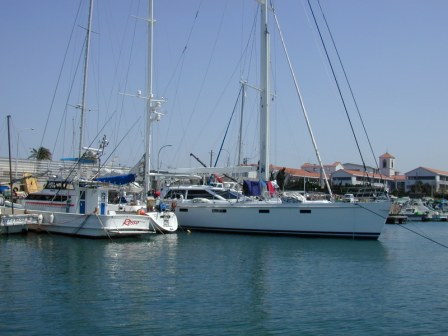 Another  # 6 earthquke hit our place.  Yuck!

The fun part was that all trains and the subway stopped, so I couldnt go to work that day. The cracks in the concrete from the month before widened some more and the wharf took another plunge. Now with high tide, only 10 cm of harbor wall is visible.  We keep our fingers x-ed that no typhoon will ever hit us at the peak of high tide. 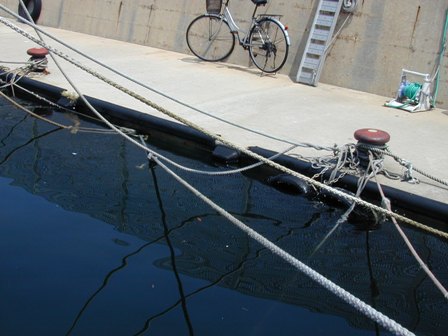 At the end of April and beginning of May we always have a few holidays. Last year we sailed to Tsushima and this year we planned to sail to the Goto Retto, to the west of . But it didnt happen.

First we had to help out with Leonores departure.  Wow what a big anchors!!

We had had a great time, having another foreign yacht in our harbor. It was nice to be able to talk English strait from breakfast time on, for 5 weeks.. We learned a lot and we realized that we are just as happy with Alishans 43 feet!

So Leonore left, but then another mega yacht arrived: sy Diablesse. 90 feet this time. Luckily for Marinoa the manager could find a parking spot for them in the halfhalf repaired marina. And we were busy again, socializing with the crew and running shopping errants in our little car. It was nice to be able to help out and we enjoyed all that English boat talk. Nice sailing captain Micheal and crew!! 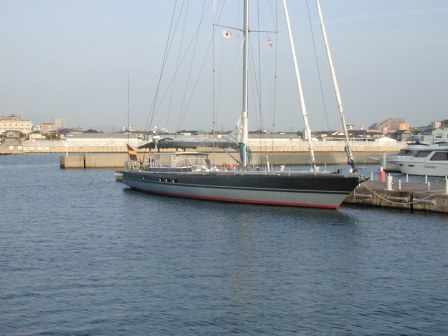 3 Days later Diablesse left and we finally found the time to start our spring~cruising~tripWe only got as far as Yobuko, 40 miles to the west of . But it was nice and we were able to feel the waves. Yobuko usually makes a good stop, as it is the Ika (squid) Capital of western . But because of the holidays the restaurants were fully booked and we missed out. Well have to go there again (by car;-) 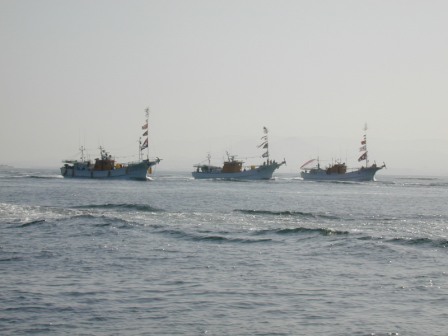 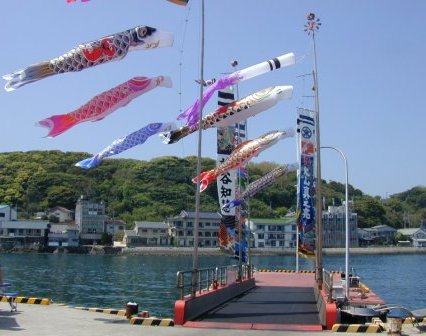 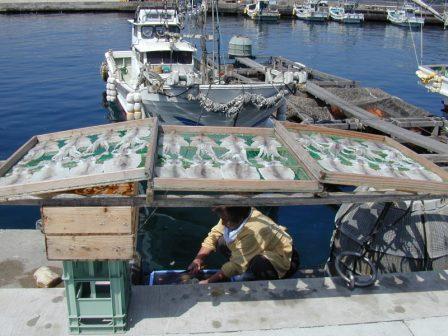 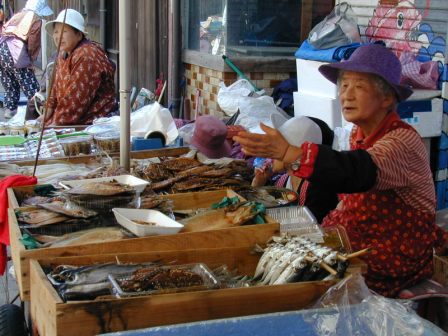 Well lets start with the Big One

It took about half a million emails and as many hours of internet research, and with the help from Tante Biep we managed to order and received a Pacific Plus Windpilot. 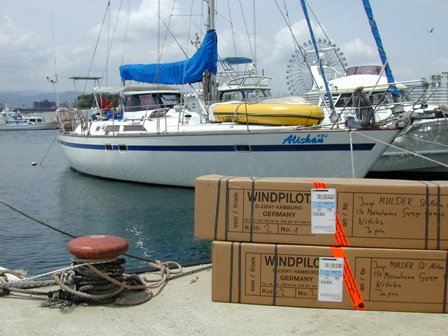 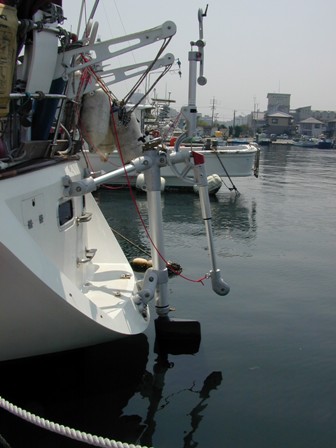 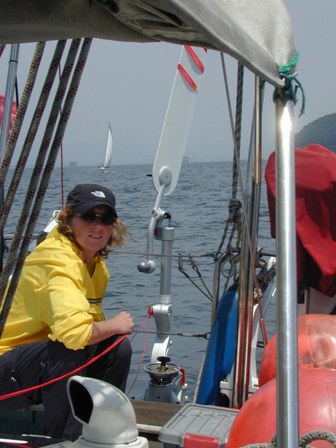 Unpacking and installing was a much quicker job, although the manual could have done with a bit more Text for Dummies. The test sail went perfect, even in light winds! The cruising future looks bright!

In I scored a radar reflector (Tri-lens) and installing it was a high-level job. The supplied bracket is very mickey mouse, so I decided to put it on the first spreader. So far we have no idea if it worksthis summer cruise will tell.

Cooking. Our 12 years old NZ aluminum gas bottles were due for replacement. We were lucky to find Japanese aluminum tanks and even for a good price. Refilling these is going to be easier than our out-of-date NZ tanks. At least here in . Those 2x8 kilos should cook for us a long time. 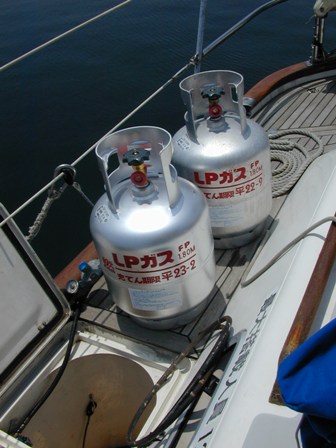 Due to that first earthquake in March we lost our shore power connection.

So haste was made and a 2nd solar pannel was ordered, together with some extra SS tubing. Now the 2 panels fit nicely on top of our jungle gym on the aft deck. Let the sun shine and the amps come. 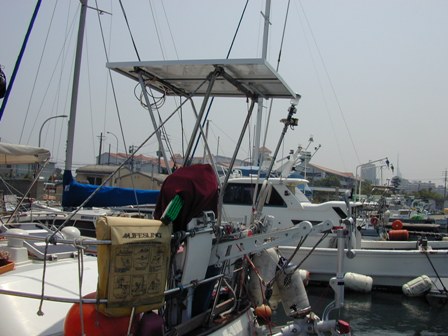