Konichiwa and Greetings to All of You,

Here we go with an update of the things we did in the first 3 months of 2006, also known as

The Year of the Dog.

We started January 1st at 6:00 am with a lot of noise from Marijkes Waidiako group at their annual show at the General Post Office. After that event we made our traditional New Years visit to 3 Japanese shrines and that was done On the Run with our marathon friends. 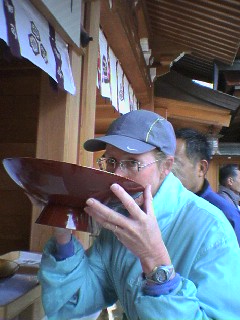 The New Year starts with a small zip of sake!

Wakame is checking out our Japanese New Years decoration. 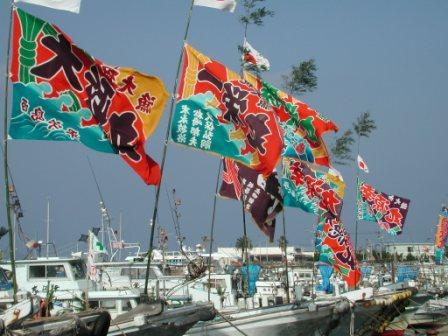 Jan 3rd was the time for another episode of the Tamaseserie, (see last year Q1). This year again, it wasnt too cold (hmmm, global warming) and we boys had a lot of fun. A sad note: last year our old local sento (public bath house) had to make place for an apartment building.so there was and will be no-more soaking after the fight. 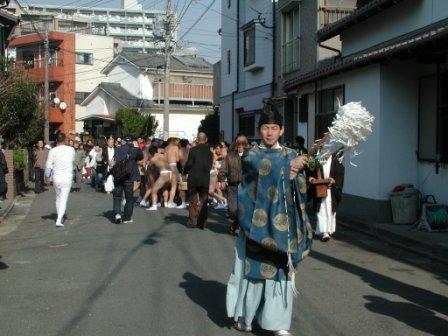 Shinto priest cleaning the air and clearing the road for the Tamaseserie matsuri. (note the scrum in the background)

Over the New Year Holiday Season we had been doing a lot of future thinking and planning. With the result of Tatatata: a PETD (possible expected time of departure) for a well deserved cruise under sail.

Hey isnt thats what we have Alishan for?

January was just a winter month, cold but not too bad, we did our J.O.B. duties and unfortunately not much play. Marijke started a monster job. She scanned the zillions of photos collected over the years. And did his miles and miles of training for the upcoming Rotterdam Marathon ( April 9th).

And then February showed up.

The first weekend we had ourselves booked for a trip to to do some downhill slippery-snow-work on the Big White Mountains. Yippeeeeee.

And to visit the famous  Sapporo Yuki Matsuri .

In English that is: Snow Festival.

And snow there was.  Or even better said: It did...

So much that on the day of our departure from , the airport in was snowed in!!  Grgrgr. Twice we were able to board the plane and twice we had to get out again. At last, after 7 hour delay they told us the flight was definite off for that day.

Luckily we were able to get a seat on the next day flight (of course for an upgrade fee) so we did get there in the end.

Trying out the slopes in a department store on day 1 of our ski holiday (see how nicely every body sticks to the left side..) 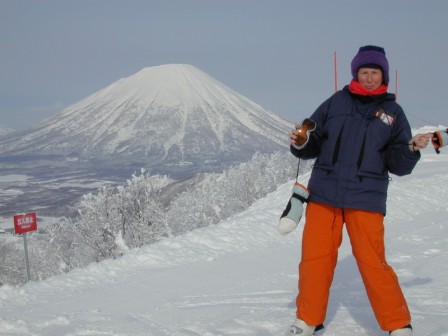 Can you take my picture?

The Yuki Matsuri in is famous for huge snow and ice sculptures in several locations around the city.

See here some awesome snow sculpture, some are at least 20m. high.

The snow bumps on the left upper side are s highest mountainsincluding:

The next weekend was dress-up time for the wedding of Ryohei and Makiko Nishijima.

Ryohei is the son of our friends Miyoko and Kunitoshi. We have known him since he was at elementary school. Good luck Ryohei and Makiko! 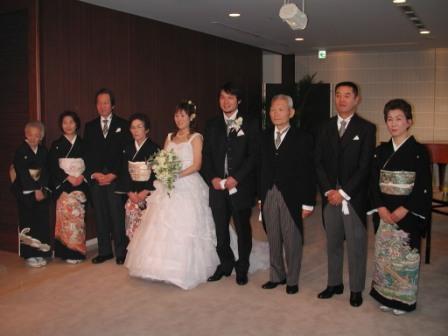 The rest of February was uneventfulbeside the fact that Jaap made it into the second half of his first century and we put in the application papers for Permanent Residency. The officer at the counter told us to wait 6 monthsand thats what we are doing.

And as you know: we do love skiing!

So off we went for another long weekend . This time with friends: Papa and Mama Kusuda, Hiroki and Tetsuya. And fun we had indeed. Thanks Reiko family.. Hope to go skiing with you again next year and lets try out those snowboards.

All in all, the winter months were filled with longing for spring, work, some fun and right, heaps of  S&R: Scanning and Running.

By now Jaap was more or less ready for the Rotterdam Marathon and guess what, Marijke made it on time to finish that scanning job of all those photos and data. Pfffffff

Can you imagine all those photos on just a few CDs. Anyway, they ended up in Jaaps backpack, to be stored in .

Remember, we have this PETD, this means:  No time to do No-boat-jobs.

Of course a lot of internet re-search was done regarding mainsail, boom, mainsail track, anchors etcetc.

With a to-date-result that Alishan shines a brand new Bruce 30 kg anchor, a new boom,

a new mixing-elbow for the Yanmar, a major engine service job (new filters and the sort), and of course the purchase

of the odd spare parts and more spare parts (will we ever need them?? And where will we stow them?? )

But writing this update, it look like that we do have enough lockers (or still not enough junk?)